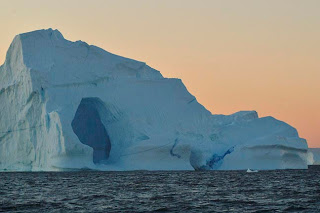 August 7, 2007. Arrived at Upernavik, Greenland, some 350 miles north of the Arctic Circle. This is our exit point to move north and then west into Lancaster Sound and enter the Norhtwest Passage. Weather has been good. Ice reports good in the Passage. Counted 79 icebergs in view two days ago. I had to go diving to free the prop of fishing gear 200 miles north of the Circle, quite cold, but good wetsuit and equipment- successful. Some radar problems. Leaving tomorrow. Have now met three scientists from the US, Denmark and Norway. All are here studying climate change. Very interesting conversations. Also talking with locals and others studying local cultures about the changes in their weather, ice, traditional hunting, fishing patterns and all. Changes are happening at a rapid rate. It is staggering. Upernavik is one of those last little places on earth. Enjoying our stay tied alongside the Norwegian sailboat, Yotun Arctic, great guys, very smart and in tune with the Arctic. Next report Canada after crossing Baffin Bay. Important crossing coming up here to position ourselves.
July 25, 2007. Cloud Nine and crew arrived safely in St. Anthony, Newfoundland, 0700 hours, July 24th, in a full gale. Slow going the last 25 miles in heavy air at night and many icebergs around visible only by radar. Winds close to 50 knots. Overall good passage of 644 miles from Halifax, Nova Scotia. We are now in iceberg territory for our next passage to Greenland. Departing tomorrow morning for the Disko Island region of Greenland (about 1200 miles) where we will reprovision before heading on to Lancaster Sound and the Northwest Passage. Track our progress and I will check in as I can.
July 17, 2007. Cloud Nine, a 57' Bowman ketch, has arrived in Halifax, Nova Scotia, for the 2007 Northwest Passage attempt. We will be a crew of six underway July 18 for St. Anthony, Newfoundland, then north to the west coast of Greenland. This will be the third attempt for Roger Swanson and Cloud Nine. Hopefully the third time is charm. I was last in the Northwest Passage in 1994. Cloud Nine reached the northern outpost of Resolute, the southern channels were full of ice and we became icebound for a period of time before retreating back out to the east and south, eventually sailing across the North Atlantic to Ireland. The history of the Northwest Passage is rich with adventure, exploration, and great tragedy...
NORTHWEST PASSAGE 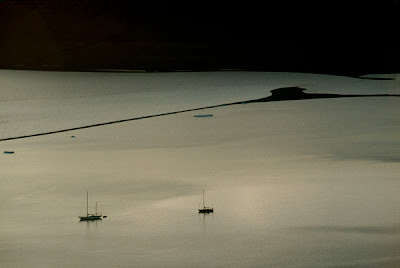 Monday, August 1, 1994 EREBUS BAY, NWT, CANADA
So....history. Today’s lesson and why we are here, besides a good harbor, is the Sir John Franklin expedition. His vessels, Erebus and Terror, spent the winter here in 1845-1846. There are still some remains of their winter cabin on Beechy Island, a large cairn at the high point and, of course, the graves of the first three crew members to perish on this fateful expedition.
Little did the rest of the crew realize what awaited them as they buried their comrades. As we solemnly meditated over their frozen tombs, we could not help thinking of the slow, wretched deaths of the entire crew over the next two years. Their vessels became hopelessly frozen in the ice and their food supply was tainted with lead from their soldered containers. They were getting poisoned and did not even realize it. The final history of their demise is still a great mystery to this day......

And so, that’s about it, this is the Northwest Passage.....
It has a fairly short, but highly charged history, full of fatal errors and few triumphs, resolute stubbornness and an eventual acceptance of native ways and Arctic realities. It is a dream world, which did not cooperate with the terms imposed by its conquerors. The Arctic and Northwest Passage have their own dreams, their very own unchanging and somewhat harsh realities that must be accepted on their terms or the consequence is peril. It is on these terms under which we will proceed, or turn back, knowing full well our own limitations and frailties as compared with the immensity and power of this most special and powerful place. This one small spot, Erebus Bay, sums up the history and the Arctic saga very well and speaks loudly, and yet subtlety, of mans’ triumphs and failures in this foreign world.

August 20, 1994 POND INLET, NWT
We escaped and did reach Resolute, but only briefly to refuel, grab a few supplies and see a few new faces. But we have now hit our “go, no go” date and must turn back and abandon our quest to venture through the Northwest Passage this year. We are in peril of becoming frozen in for the season and cannot risk this occurrence. There will soon be a night again, and darkness in the ice is fatal. Cloud Nine is sailing southeast across Baffin Bay to Greenland, and south to some relative safety.
Posted by David Thoreson at 8:17 PM

David,
Good luck and godspeed to you and cloud nine. Pows

Good luck Dave. I will send updates of the Husker and Longhorn games. See you in Austin Oct. 27th!

I have just come across your spectacular photos and blog. Our interest, aside from the story of your amazing adventure, is that we too own a Bowman 57 (Aleria) and are planning to do a world cruise. There aren't many around, so I wonder if you can provide an insight or two about how Cloud Nine performed under those storm conditions you recounted.

I wonder also if you might put us in touch with Roger Swanson.

Your photos are magnificent. Thanks for sharing.