It is with a very heavy heart that I post tonight. My friend and blue-water sailing mentor, Roger Swanson, has passed into the deep after a hard-fought battle with illness. Roger was a great mind, strategist and adventurer. He taught so many people to not fear venturing over the horizon.
Because of his willingness to accept greenhorns on his sailing vessel, Cloud Nine, many, dozens, hundreds of lives were changed forever, including mine. I sailed seven times with Roger and nearly
40,000 nautical miles. By seeing the remote regions of the world by sailboat, and working hard to get there, I was privileged to experience the environment in a unique and nuanced manner which shaped my life and views of ecology and climate forever. 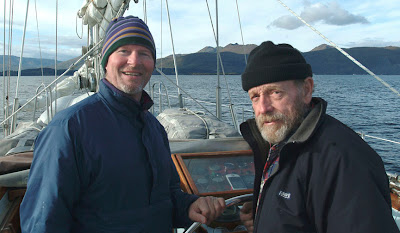 Roger opened doors that were closed, that only he could have opened. Because he wanted to share his experiences on "Cloud Nine" with so many others, the world is just a little bit better and understood.
There will never be another one like him. The era is now forever gone. The world has changed.

Fair winds and following seas Captain, Godspeed and thank you always for taking me to the sea...
Cheers, David

A new 2009 expedition will leave from Seattle aboard Ocean Watch, a 64' steel cutter rigged sailboat on May 31, 2009, for the NW Passage. I will be part of the crew of four attempting the Passage west to east as part of the Around the Americas expedition to raise ocean and sea awareness surrounding the continents. The 28,000 mile sail will take about 14 months beginning and ending in Seattle. Please see the links and more information will come soon. Thanks.

**Note- The expedition was successful and returned safely in June 2010. See my other blogs for details on books, traveling exhibit and to book speaking engagements.
Posted by David Thoreson at 9:34 PM 7 comments: 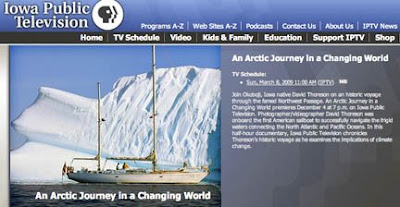 Hello to all viewers. After a long wait my documentary film (30 minutes) will make its premier on Iowa Public Television on Thursday night, December 4th, at 7 pm. Hope you all can watch, if not there are a couple links here to check out the promos on Youtube and IPTV websites. Thanks for watching. And special thanks to everyone at IPTV for all the tremendous help in producing this piece. Please give me some feedback.
Posted by David Thoreson at 5:44 PM 2 comments:

All Climate Records Smashed in the Arctic 2007

Hello everyone and welcome to the story of Cloud Nine's record-setting voyage through the infamous Northwest Passage. If you are interested in the entirety of the sailing expedition, it is all here in gruesome detail. If you are interested in thoughts/stories on topics of climate change, politics, my exhibit, etc, please check out the links to the right. Thanks for stopping by the blog and look for lots of new posts in 2008.
Posted by David Thoreson at 8:20 AM 1 comment: 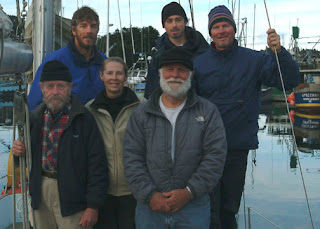 After 73 amazing days and 6640 miles, Cloud Nine and crew pulled alongside the dock in Kodiak and an astounding adventure through the Northwest Passage came to a close.

The Gulf of Alaska passage from Dutch Harbor to Kodiak was a lumpy one to say the least. We had a gale it seemed the whole time and one nasty storm with 70 knots of wind and 20-30 foot seas. At one point in the evening, at the helm, I surfed down the backside of a huge sea at 14 knots with Cloud Nine on a full plane. 26 tons of vessel with the bow beginning to bite. Pitch-pole conditions. I shook from adrenaline for about 30 minutes. But we made it in with everyone doing a great job, as usual.

It is going to take a little time for all of this to sink in, but we are all proud of the achievement, the teamwork, camaraderie, and the performance of the battle-tested sailboat, Cloud Nine. Also, Roger Swanson deserves whatever recognition he receives for being one of the finest captains and mentors in the profession. He’s the best, and never stops, even at 76 years young.

Now is time to re-enter the world again and try to put the travel through the Northwest Passage, climate and cultural issues, and all the images, video and writing to good use. Quite a challenge, but I look forward to sharing thoughts with everyone and the ensuing conversations.

Awesome times ahead and new adventures await. Thanks again to all of you who have followed and encouraged us along the way, and especially those of you who have helped me personally with maintaining while I have been away. Look forward to seeing you soon. For now, this is a weary, but happy sailor signing out from Kodiak.
Posted by David Thoreson at 1:03 PM 9 comments: 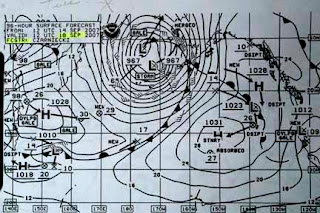 Wow! We made it out of the Bering Sea. One low pressure after another has raced through the area, one looked like the "perfect storm" on our weather map. Actually like a bullseye. Cloud Nine sailed from Nunivak Island to the Pribilof Islands to make some south and west against the prevailing winds so a favored south and east route to Dutch Harbor could be taken. This strategy paid off as we ended our anxious sailing with a beautiful run on the first day of autumn into Dutch Harbor after midnight.

Needless to say we are tired and beaten up after 6000 miles of sailing, but we are planning our departure to Kodiak in the next few days. We have storms again and big seas out there, but maybe following seas and westerlies at least. It is easy to see why they film "Deadliest Catch" out here. This is one of the wildest weather areas any of us has ever seen. Weather races through here, but the geography here is spectacular with 7000 foot peaks right out of the sea and lots of activity in the busy fishing seaport. 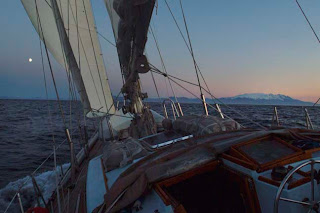 We've been joking about a new series called the "Deadliest Sailboat," and telling our tales of adventure and where the crew will be next week and which crewmember has what going on and such. Good way to pass long hours on watch. At any rate, we have a great and new respect for the Bering Sea and all those who make their difficult livings and lives in this rugged, remote part of the planet.

One leg left. Will post from Kodiak. I'll try to get more photos up. Thanks all to all of you out there. Cheers, David
Posted by David Thoreson at 1:27 PM 7 comments:

We finally made it about 275 miles south of Nome to Nunivak Island and a safe anchorage, but we have a gale for a few days and it's proving to be difficult out here in the Bering Sea. This undertaking is not over, by any means.

We will be ending our journey from Kodiak after all. Very stormy in Kodiak, but Seward's yard is full for the year and another day's sail from Dutch Harbor. Still 1200 miles to go from here and it looks tough.

For now, we are safe and in a good spot. There is a solo Arctic sailor on a boat named Alpha Wulf next to us who is also going to Dutch Harbor. He is a retired filmmaker who used to film wolves. Our own little pack on the sea...

Thanks to all of you for the support and feedback on Douglas Belkin's great article in the Wall Street Journal. (Heard it also made the paper in Seattle. Please let me know if you found out about Cloud Nine's accomplishment elsewhere.)
Posted by David Thoreson at 7:28 PM 2 comments: